The LRM (Lease Rental Matrix), which determines the average lease length and the adjustment to quoted lease rentals to reflect longer or shorter terms, has seen stability terms as demand eases back in terms of passenger growth.

Lease terms can vary considerably and are to a large extent dependent on the market conditions. Lessors have been able to secure longer terms such has been the strength of the market. But with the transition to new types, there has not been an extension to the lease terms over the last year. This is a function of supply. The lessors are also cognizant of the need to take advantage of the current stronger market and lock lessees into rates for as long as possible. Lessors prefer to keep aircraft with the existing lessee for as long as possible as remarketing can involve administration as well as costs. A subsequent lease may also see a lower rental on a shorter term. Matrix 2 sees a shortening of lease terms after the first lease term has finished. If a lessor is fortunate, there may only be a need to lease an aircraft three times before being able to retire the aircraft.

A sufficiently long lease may actually be sufficient to achieve a full payout thereby reducing or eliminating any residual risk. Some of the leases secured for the A380 are on 12 years terms at rates that will fully eliminate the capital and interest cost thereby leaving owners with considerable flexibility, which will be helpful in view of the A380 being illiquid. Most lease rentals are based on a floating rather than fixed interest rate. While the margins on some more recent sale and leasebacks have been less advantageous to the lessors due to the competition, previous deals will also have seen sufficiently high levels of rentals on the A330-300s and B777-300ERs to see a near full payout being realized at the end of the first lease, particularly if associated with an end of lease compensation payment. 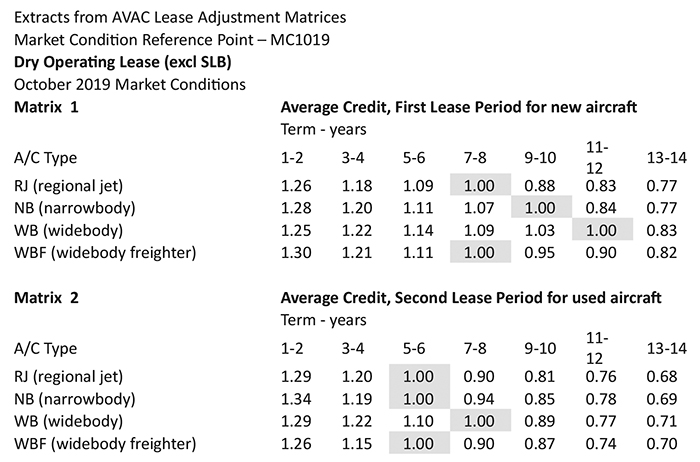 Generic lease rentals or lease rental factors (when the monthly lease rental is expressed as a percentage of the current – or future – aircraft value) are often quoted but these are usually dependent on the assumption of an average lease term, to an average credit, with average return conditions and at three months security deposit. The generic lease rentals can be adjusted to reflect the specifics of a lease changing the rentals to compensate for a longer or shorter lease, a stronger or weaker credit and a sale and leaseback transaction.

The adjustment factors used for the lease term and lessees credit ratings are however, a constant but are dependent on the state of the overall market. During weak market conditions, when supply and demand components are in favor of the former and equate to those of the period 2001-2003, the baseline lease term is that much shorter as lessors seek to place aircraft. Lease rentals tend to fluctuate more than values and in placing aircraft for a short time on a lower rental, there will be an expectation that rentals will improve. The aircraft will therefore need to be re-leased when the lease rentals have risen. Conversely, when the market is strong, lessors will be anxious to place aircraft on the longest possible lease at a higher rental.

The Aircraft Value Analysis Company Ltd (AVAC www.aircraftvalues.net) cites that a Tier 2 lessee represents the baseline case for the credit rating based on a downturn scenario. A Tier 1, lessee with an excellent financial standing, will warrant a multiplier of 0.94 to the baseline lease rental; a Tier 3 lessee a multiplier of 1.09 and a weak Tier 4 a factor of 1.17 compared to the baseline lease rate. A sale and leaseback transaction may see a multiplier of 1.12 compared to a dry operating lease rental. (Highlighted = assumed standard term, average credit, half time return conditions, 3 months security deposit.)

THE SEARCH FOR AIRCRAFT VALUATIONS
A one-of-a-kind database filled with aircraft valuation data, including information on leasing, valuations and vital statistics, as well as Aircraft Assessment Reports.
LoginSubscribe to the Valuator

Advertise/ Subscribe/ About Us/ Contact Us/ Reuse/Reprint/ Privacy Policy/ Diversity Inclusion & Equity
Mission / Aircraft Values News was created in 1992 to provide independent and informed advice regarding current and future aircraft values, and the factors that affect them, to the air transport community.AVN's core activity is the provision of expert commentary on current and future market values and lease rates. AVN seeks to interpret and analyze current events, enabling readers to more accurately anticipate future market trends. AVN expertise centers on an appreciation that aircraft are a commodity, subject to vagaries of supply and demand. AVN's subscribers comprise decision makers at financial i aft lessors and airlines.
© 2022 Access Intelligence, LLC – All Rights Reserved.