The American Airlines 2019-1 EETC, featuring 35 aircraft, sees reasonably strong base values and some measure of consistency among the three ISTAT certificated appraisers. 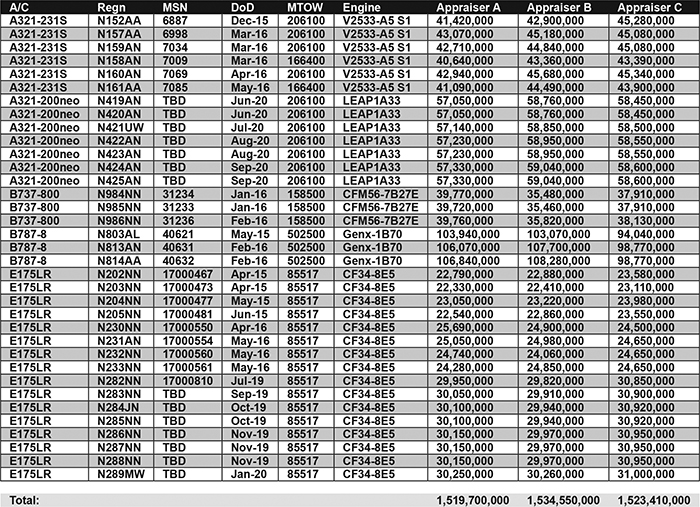 The aircraft were appraised by three U.S. based appraisers as rarely are non U.S. appraisers used in EETC transactions. The basis of the valuation was the theoretical “Base Value” adjusted for the maintenance status. The A321ceos represents high gross weight examples offering considerable range flexibility although some do have a very low weight which has warranted a reduction in value. The values of the A321ceo aircraft are perhaps some $2-3 million higher than the market values and surprisingly there is a near ten percent differential between Appraiser A and Appraiser C. For the A321neos, the values are relatively close to the market value with consistency among the three appraisers. American has always been something of an anomaly when it comes to the B737-800 as the aircraft usually have a low weight but a high engine thrust. the base values attributed to the aircraft see Appraiser A give the highest value whereas with the A321 it gave the lowest. There is more than ten percent difference between Appraiser A and Appraiser B with the market value being nearer to Appraiser B. The base values attributed to the B787-8s represent the greatest concern as Appraiser A and B are nearly 20 percent higher than the market value with Appraiser C being ten percent lower than the other two. The base values will not reflect the current market realities affecting the B787-8 and therefore may appear reasonable. The values given for the E175s are consistent among all three appraisers although they are more than ten percent higher than the market value. Again the EETC assumes three percent per annum reduction with respect to the base value projections but Moody’s uses 7.5 percent in year 1 and 4 percent per year thereafter for the A321neos, 7.5 percent in year 1 and 5 percent per year thereafter for the A321-200s, B737-800s and the B787-8s, and 7.5 percent in year 1 and 6 percent per year thereafter for the E175LR regional jets.

THE SEARCH FOR AIRCRAFT VALUATIONS
A one-of-a-kind database filled with aircraft valuation data, including information on lease rates and valuations, organized by year of manufacture for each model.
LoginSubscribe to the Valuator

Advertise/ Subscribe/ About Us/ Contact Us/ Reuse/Reprint/ Privacy Policy/ Diversity Inclusion & Equity
Mission / Aircraft Values News was created in 1992 to provide independent and informed advice regarding current and future aircraft values, and the factors that affect them, to the air transport community.AVN's core activity is the provision of expert commentary on current and future market values and lease rates. AVN seeks to interpret and analyze current events, enabling readers to more accurately anticipate future market trends. AVN expertise centers on an appreciation that aircraft are a commodity, subject to vagaries of supply and demand. AVN's subscribers comprise decision makers at financial i aft lessors and airlines.
© 2023 Access Intelligence, LLC – All Rights Reserved.